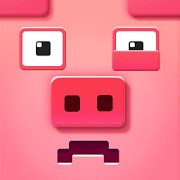 Probably everyone remembers their first mobile phone, the first games on it, the first victories and the first records. One of these games was the famous snake. Everyone tried to set a world record so that their snake was the longest, but not everyone did it. As time passed, technology developed, games became different, phones became more advanced, so everyone forgot about the snake. However, we decided to rework the old game in a new way, while preserving all its meaning. Meet the new and at the same time well-known application - Pig io - Pig Evolution io game.
The essence of the game Pig io - Pig Evolution io game remains the same as before, you need to feed your character, as much as you can. Just in the new application you will control not a snake, a gluttonous pig. As you progress through the level, your pig will grow in size and check your father in a more powerful and powerful pig. Can you feed your family in such a way that it evolves and a huge svinotaur ?!